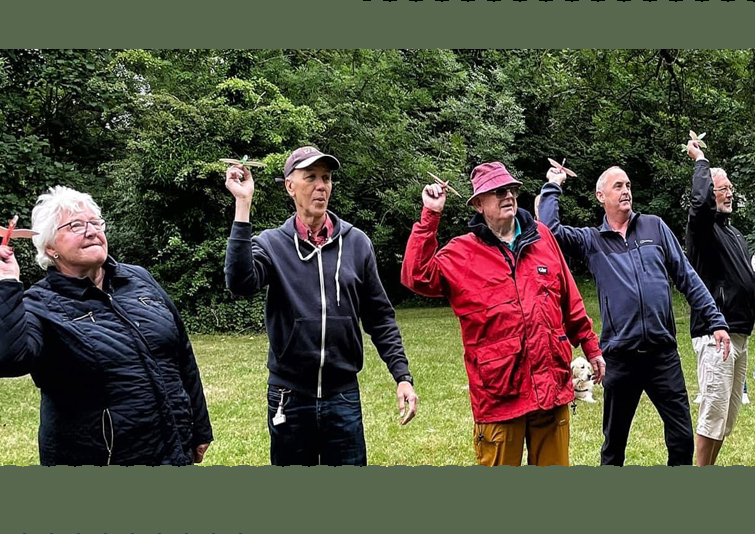 12 boats arrived during the Friday and following being marshalled unto moorings positions by our mooring master Tony Riley, we ‘set to’ and with great effort began the gazebo puzzle !!! Eventually we sorted out the erection sequence, after resorting to reading the manuals.

About 18:00 hrs we drifted down the road to The Rising Sun, for our evening meal.

Linda thankfully acted as chauffeur for some members to/from the lock.

It was a pleasant evening, wining and dining (3 courses) renewing old friendships and meeting new ones.

The Saturday was self-catering followed by fun and games.

Celia tested our knowledge of the Thames, and after the usual disputes the winners of this test (after a draw with 3 couples being equal) was Michael & Bev  Chittenden (Elusiff) with Michael answering a question about Maidenhead Bridge at a speed which confounded all, they both received a gold medal, specially purchased on Amazon.

The next event was the horseshoe throwing, a difficult game to control as the contestants would not obey the rules, however we eventually decided on a winner and after a ‘play off’ Martha (Accolade) won, Receiving a Gold Cup for her athleticism.

Next in line was the putting together a flying dinosaur, again some cheated doing this ?? but we got a winner with the longest distance a dinosaur was flown was by Roger (Elusiff)  Who also received a gold cup?

To calm things down Linda produced various cakes and delicacies and we ended late that evening.

Sunday saw our farewells and departure from Hurley.

We had no room to accommodate our BOC member from the SE but met up with Roy & Judy Lord (Secret Love) at Cookham, it was great renewing all our friendships again following the 2 years of covid.

Some of the Fun & games!